About the Modbury Bowling Club

The Modbury Bowling club is located in a picturesque location surrounded by trees and other sporting venues and is the home of the Modbury Thunder.  Listen to the birds and kookaburras while you play or enjoy the facilities.  The club has four grass greens and excellent club room facilities.  The club facilities include a commercial kitchen and bar.

Our bar is open most days and sells drinks (Alcholic and Non-Alcholic) and crispy pizzas that are ready in 10 minutes.

For your entertainment we have a pool table and dart board that you can use free of charge.

The inaugural meeting of the Modbury Bowling Club was held in the Modbury Hall (now St Johns Ambulance) on the 29th October 1958.  To finance the club it was resolved that debentures of ten pounds ($20) be issued to all intending members, plus a yearly subscription. Purchase of debentures was compulsory for all members.

The first meeting of the club was held on the 10th November 1958 and it was interesting to note that it was passed that – “We place on record that this Club is desirous of forming a Ladies Auxiliary.”  The only free area of land available at this time was a small section situated on the northwest corner of the Modbury Oval (now the Civic Park), and owing to its size, it was only practical to lay seven rinks – and even to obtain this area it was necessary to do extensive bulldozing.

An application was made to the Modbury Grounds Committee to use the land – and this request was granted for the sum of two pounds per annum.  In order to finance the building of the rooms and the making/laying of the greens, a one thousand five hundred pounds mortgage was arranged.  On the 23rd March 1959, ladies held an informal meeting at which considerable interest was shown in the forming of a bowling club. It was duly moved that a club be formed and known as the Modbury Women’s Bowling Club.

In October, 1959, a transportable Housing Trust hut situated at Daw Park was purchased, transported and erected on our site. It measured approximately 70’ x 20’ and cost four hundred and fifty pounds. A section was partitioned off at one end for a kitchen, and at the other a bar, which operated quite illegally, as no clubs had licences at that time.

In 1960/61, Modbury entered a men’s pennant team in the sixth division – the first match, against Rosewater, comprised 16 members who had never before played a pennant match. The match was lost by over 100 shots. On the 11th May, 1961, the ladies decided to affiliate with the South Australian Women’s Bowling Association and entered one ladies team for pennant play for the 1961/62 season.

In the early years of the club, each bowler brought afternoon tea for himself and his opponent – this was distributed around the tables and led to wonderful varieties of food. The club could not extend any further on the old premises, so obtained a new area of ground on the Modbury Sports Area in 1966. The Tea Tree Gully Council was very helpful an Opening Day 67ad co-operative – not only providing the land, but also in assisting us to borrow the money to build the new clubhouse – costing $16,000.

Our current B and C Greens were originally joined as one very long extra green that was divided eventually. It was originally couch and bent grass, santa-anna and then tiff.

Dress Code for ladies was very severe. White dresses and petticoats 15” from the ground was the length, stockings had to be beige, the hat with white hat band gold lettering, no jewellery or earrings, name band on the dress, state badge on the front of the hat. The hat had to be on at all times even if you went shopping after bowls. There were no colours, just white cardigans or blazers, white rain gear, white dusters.

In 1972 an additional $14,000 was spent on the clubhouse, mainly on additions to the bar and lounge. In 1972 indoor bowls began during the winter months.  In 1982 a further $50,000 was spent on extensions to the club house and at that stage there were 23 rinks.  In 1997 the introduction of Night Owls proved very successful with 4 greens full each Wednesday and Thursday evenings, with Social bowls competitions being played on Wednesday, Friday and Saturday afternoons.

In 2002, coloured uniforms were introduced for the ladies– initially turquoise shirts with white pants.  In 2005/2006, the men’s and ladies clubs amalgamated.  Extensive renovations of the clubhouse have occurred in the last few years, including the kitchen, bar, air conditioning, floors and honour boards.  2010 saw the ladies update their uniforms,with the men following shortly after.  In 2010 The club adopted the nickname “Thunder” as its  pennant sides nickname and so  the  new logo and cry “Go Thunder” was born.

With thanks to our late Foundation President Eric Davies and club stalwart Judy Whiting. 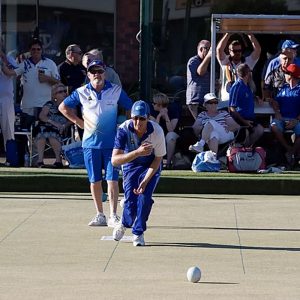 After several years of investigation and with the support of the South Australian Government and the City of Tea Tree Gully the Modbury Bowling Club undertook its biggest upgrade project to date on the 8th February 2019.  With an overall cost of over $1.6 Million dollars, both C and D greens where replaced with the state of the art synthetic greens.

Due to the highly reactive soil type in the area, the greens had to be engineered to withstand any movement.  The engineering consisted of floating a enormous slab of concrete on 225 steel piers (per green) drilled down to 4 metres.  Each green is estimated to contain over 500 tonnes of concrete.   Under the close supervision of President Jose Gil and the City of Tea Tree Gully this project was a complete success giving the Modbury Bowling Club all year round bowling facilities.  Check out the video below to see the timeline of the project and the work involved.  We would like to thank the SA Government and City of Tea Tree Gully for the support to get this project completed and the outstanding work performed by MYKRA and TigerTurf.